In my hideaway valley I'm surrounded by amazing stories and amazing people. People who walk the wild edges unafraid and full of curiousity.  Here is a guest post from one of those amazing people.

At this time of year when we in Western cultures are busy buying and consuming Shen writes about the Sacred Market Place. 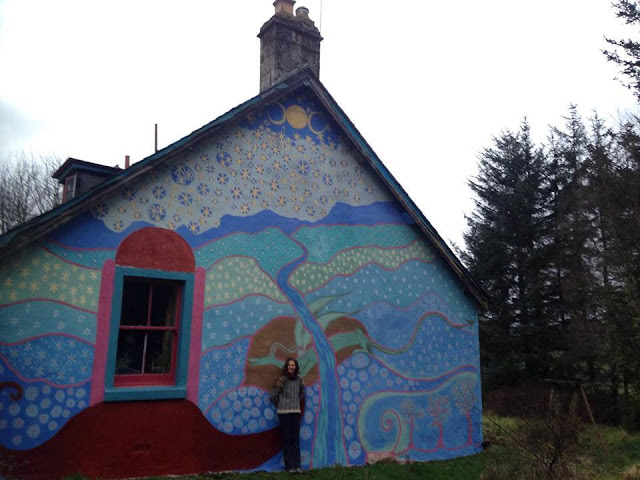 Shen outside her house. 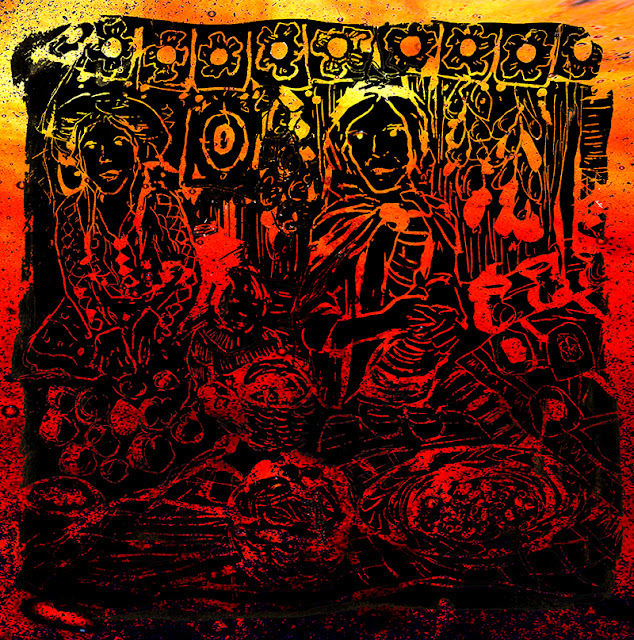 
This is an article about the Animus - Art for the World Soul Artists Collective.
The name ‘Animus’ is based on the ancient meaning of the word, embodying wind and breath, life and soul. The artists in Animus are actively engaged in a re-consecration of art for the purpose of the re-enchantment of the world. In this post, I’m focussing - in a somewhat expanded sense - on Animus’s first online auction, held here from December 19th - 20th.


The words ‘sacred’ and ‘marketplace’ are usually seen in a polarity, rather than a union, with one another…as in the Biblical passage:

Yesterday I read an article by George Monbiot about the toxicity of unnecessary products which tested my faith in what I do: as a visual artist, I’m an active creator of things as well as an inevitable consumer of them…and am just putting together the first online auction of the Animus ~ Art for the World Soul artists collective. Therefore you could say I’m hard at work adding more stuff to the world; not really what I’d want on my epitaph.

The purest, most sacred essence could be experienced as formless…but a recent dream showed me how abstract is this intangibility. The next scene presented a row of offering bowls, each with a tiny written explanation by it: 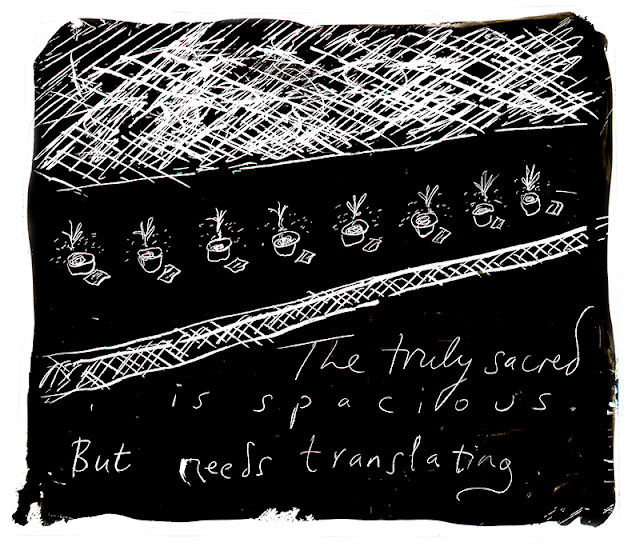 This made me understand it more fully: undiluted spaciousness is so ungraspable that its rarified nature remains unattainable to those who aren’t yet operating on such an ultimate level. A bridge is needed…and that bridge needs to be clothed in matter if it’s to be useful. As Nigel Richmond said, in his 1970’s book on the I Ching, Language of the Lines’ (free to download here from Joel Biroco’s insightful site, by the way):

Each realization takes a liberty with the reality of the one but is also a link with it.

Part of the joy of being embodied in this worldly realm is the sensual joy of what is earthily tangible; angels, in their more ephemeral reality are said to miss that ability to physically feel. We’re only now beginning to move out of a long, long phase in which what is embodied has been seen as, by definition, non-spiritual, making it ‘natural’ for people to treat it as such. It’s telling that the American-English for the body of the earth is dirt.

This is what Animus - Art for the World Soul is seeking to redress, for however tame, lame, mundane and civilized our life may appear, within us our unkempt pilgrim soul is replete with the same shimmering birthright of creative, abundant freedom our most extraordinary ancestors embodied.
Similarly, however irredeemably urbanised, desecrated and disrespected our holy earth seems to be, her pure indigenous essence is hungry for heart songs, dances which shake the dust from her body, offerings of ochre, plant, stone and love which re-member her wholeness and beauty.

It’s quite simple. What we - this and previous generations - have desecrated,it’s our sacred work to re-sanctify, to make whole and holy once more. There is no-one else to do it for us; we must joyfully rise to the challenge with courage, grace and devotion: as Hopi Elder Thomas Banyacya told us,

‘We are the ones we’ve been waiting for.’

It’s our quest in life to find out just how we’re to do this. In Animus, we’ve been called to re-member the world’s harmony through art, choosing diverse forms of creative expression as a bridge to spirit, to the sacred. With the animistic view which attributes a living soul to all things, the art itself
then becomes infused with this essence and can become a gateway, a bridge, to this re-memberance, for another person.

For it could be argued that the art which never leave its creator’s side has not lived fully. As Kahil Gibran describes children,

They are the sons and daughters of Life’s longing for itself.
They come through you but not from you,
And though they are with you yet they belong not to you.

As the children of artists, artworks have their own destiny to live out. We entrust them to the sacred marketplace in the faith that they’ll find their way to the person to whom they are called, to open new realities for them. They could be described as having talismanic qualities; embodying a particular, beneficial essence.

(Fabeku Fatunmise’s highly recommended, inspiriational talk ‘Why Art Matters’ elucidates this along with many other facets of creation.)

Or using the illustration of a ‘touchstone’; just as a simple pebble in one’s pocket can, when touched, take one out of dis-connected mental loops and be a small but potent re-minder of what is eternal, uncomplicated and natural, they can bring you back ‘home’ ~ over and over.

Another potent analogy for me is the Native American tradition of the Faithkeeper. A person who assumes this rôle within the tribe remains centred, at peace within themselves no matter what dramas unfold and misfortunes strike around them. In this way, they become a living thread connecting the sacred heart of life with its often chaotic outer rim.

We’re all called on to be faith keepers ~ to not get thrown off balance by the potentially shocking or disheartening way life can unfold ~ but I’ve just begun to appreciate how an artwork can itself be such a keeper of the faith. A deepening faith in the great unfolding of your own small but precious life…and in life itself.

Here's the link to our auction again: the first image in the album has all the details you’ll need next to it. There’ll be a giveaway of a Zhouyi Oracle (microcosmic D.I.Y. edition) as the auction ends, open to everyone who shares the auction :)


Happy Christmas Everyone
Posted by THE OLD BURROW at 07:56 No comments: