Trees and Stars, Root and Rock

It seems to be, that many times when I paint a picture a story seems to grow around it. Sometimes only a few words and sometimes more – a sort of deepening of understanding of the life of the picture and its characters.

Most paintings come with only a small snapshot of writing – a tiny glimpse into their world.
But many years ago I painted a picture that started a story that seems to be living and growing inside me. It is very slow and sometimes months go by before I write again. When I do sit to write it I never know what is going to appear on the page – only a feeling of wonder as I read what my hands write. Just like some of my paintings I am just watching and occasionally meddling for better or worse.

The beginning of the story can be found here .... 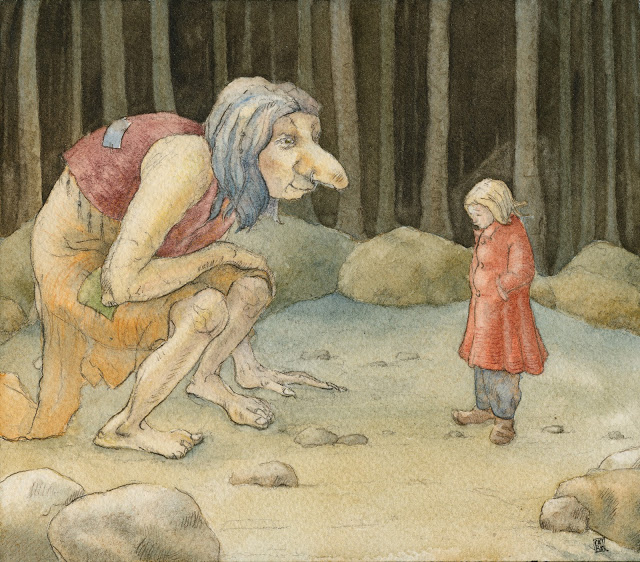 This Spring I am going to be taking part in the Flagship Exhibition for Spring Fling at Gracefields Arts Centre in Dumfries. The Exhibtion theme is all about the process around art work..  and so I decided to submit the process behind Troll song. It is one of my most popular paintings and one that is dear to me because of its ever evolving story that leaks from my fingertips with incredible irregularity.

As part of the process piece there will be on show further excerpts from the story and more sketches all bound together in a beautiful wooden book with a "Please Touch" tag attached.

When I looked at the original painting again and re-read the story I began to realise that the Troll, as much as I loved her, may not be quite right for the story? I'm not sure but as I played with illustrating another scene from the story a new Troll form appeared.

And so in the spirit of sharing the raw and unshackled process of art and writing here is a tiny bit more of the tale and a few sketches.

Unn followed the Troll, delicately picking her footfall between the rocks and fallen branches. Guided by an almost an instinctive necessity to avoid the snapping of twigs and crunching of fallen leaves. Each reverent step designed to preserve the still peace of the forest as much as it was to find safe footing on the sloping wildwood ground.

She could hear the Troll Mother breathing. Each exhalation a relaxed sigh that somehow seemed to mimic the voices of Fir trees in the wind. A rhythmic remedy for loneliness and uncertainty.

Descending, the air moistened and the forest darkened and deepened.


For the first time in many years Unn’s yearning for home seemed to willingly withdraw into the corner of her mind. Like a well worn book, a favourite bedtime story outgrown and finally taking its place in the bookshelf with other loved but not-now-needed tales and dreams. For now at least.
Curiously her sight now somehow refined and opened, she found that all that passed into her vision seemed to ripple with an energy she had not noticed before. A vital quivering in tree, boulder, leaf and stream.


At the waters edge the Troll paused for a moment then crouched and slurped through her whiskers .


Unn glimpsed the brown and jagged teeth that should have been terrifying in any other creature. Squatting beside the enormous blue haired form Unn cupped her hands and drank.


A Jay alarmed in the distance and the flapping of nervous pigeons followed. The troll looked east and then returned to her slurping.   Soon, belching and wiping her face with the back of her hand she rose and stepped into the stream. The water came up to her knees and the sparse blue hairs on her legs waved in the current like pond weed. She beckoned Unn to come closer. With the gentlest of touches the Oracle lifted Unn onto her shoulders and carried her across the water that would indeed have been up to her armpits at least. 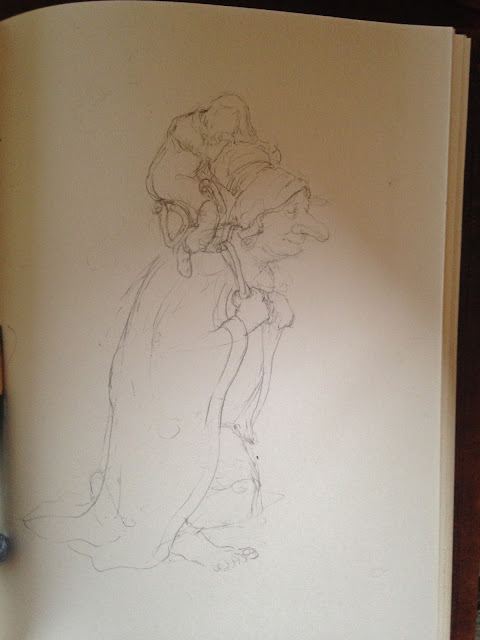 How amazing the forest looked from up high, thought Unn. Again she caught the sense of quivering energy that filled the forest forms and the spaces in between. 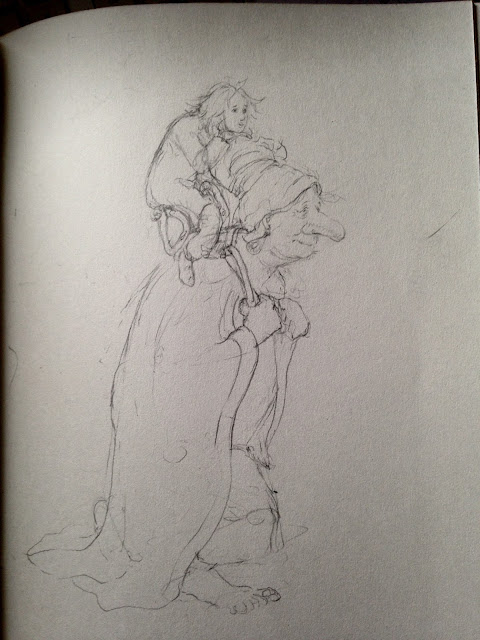 “ Fire of life you see” the gravelly voice instructed. “Life-Fire.” “Trees and stars, root and rock, Unn and Oracle.” 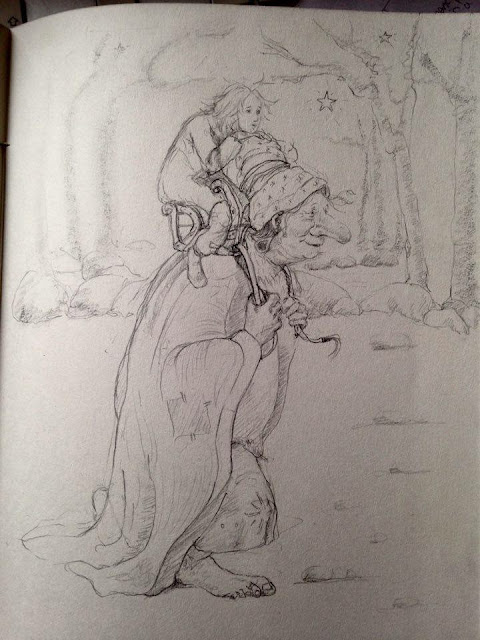 Unn looked down to see the Troll’s cheeks bunch up and deep wrinkles form around her eyes and assumed the troll was smiling. A waft of warm earthy breath confirmed that she had indeed opened her mouth.


On the other side of the stream the Troll did not set Unn down but continued to carry her until nightfall. Along soft woodland paths, up rock laden hillsides, through bramble and nettles. Unn watched as the Trees changed from Oak to Yew to Birch. The gentle swagger of the Troll,  her huge and near silent footsteps lulled Unn into a trance.  The flickering of ‘life-fire’ twinkled all around her.


A lone thought entered her head. “How did the Oracle know her name?” she watched the thought swim through her mind and never felt the need to answer it…. it somehow seemed unrequired.
Posted by THE OLD BURROW at 02:05 5 comments: