More and more these days I find I have less to say. Nature seems to be creeping in through the windows from the woodlands that surround my house and crawling under my skin reminding me of my smallness and wholeness – and it's a lovely feeling.

It's subtle magic but when it touches us we all know.

I see it in others from time to time and then knowing glances are exchanged and small smiles are raised.

Sometimes, when I'm at an exhibition and I watch other people look at art, I see that look. I see a look, a faint smile, a sense of distance and closeness simultaneously – their senses absorbed and arrested whilst something from within the picture is nourishing their inner most depths.

Then a thought or a noise may interrupt but if it happens to be my own art work and I tell them a small story, or a few tale-teasing words then the mind is again arrested in the listening and something akin to the nature that surrounds my home creeps in from the realm of story and picture – it gets under their skin and I watch their soul being fed.

Different stories and pictures resonate with different people and not always as you may predict. For my own work I was recently privileged to watch young children, young men, young women as well as older men and women find a resonating chord within themselves.  Any amount of analysis is useless but I appreciate the spectacle.

So without further ado here are a few tale teasing words – a little nourishment for those who find it here ... a small slice of story to celebrate the arrival of my little nephew Wolfie.

The veils between the land of story and the land we call our own are much thinner than we’d like to know. How else could it be so easy to become deaf to the world while we are lost in the wonderland of printed words and mesmerizing pictures.

We all stray there – most of us return to live our daily lives and then there are those of us who don’t.  Many folk-tales warn of the dangers of such lands. People missing for years and years or never returning at all. A danger that only succeeds in bringing a twinkle into our eyes, a skip into our step and an urge for our fingers to creep towards the next page before the reading is done.

Sometimes – only rarely, there are those whose fortune is to be born there first.

When a Mother’s heart calls for her child and the waiting seems unbearably long, it may be because the child’s soul has been first born into this world of magic and mystery.

A child is coming…. A story is being told…

In a cottage deep in the woods a human infant appeared on the fireside seat just as a tired and bearded gnome was about to sit down after a day that felt longer and bristlier than his whiskers.

"Helgaaaaaaa! Helgaaa!" He stood frozen and flustered staring at the luminous creature before him – the only bits of him that were able to move were his lips and his vocal chords and they were making good use of the energy not being consumed by his other organs and muscles.

Bruder was, for the most part, a placid gnome but he did not like surprises. What ever had appeared on his chair was a definitely a surprise and more than that it was the wriggling, wailing type and they made him very nervous.

Helga bustled into the room wiping her hands on her skirt wondering what all the noise was. With Bruder still yelling her name and the baby crying, the noise was so great that even the old cat opened her eyes before she curled up into an even tighter ball with her paws and her tail over her ears.

"It’s a sapling," she gasped, "A beautiful human sapling! Oh foxes and chickens! We must get him to the gates before they shut."

"Where did it come from?" He asked begrudgingly.

"Inbetween" she said, pushing away the question in a voice that said that it was cumbersome and awkward to answer.

"In between what?" Bruder nudged the question meekly back in her direction just in case he might dislodge an answer.

"Here and there’"she snapped, gathering together provisions for the unexpected journey that Bruder had not yet realized he was going to be involved in.

She collected food and blankets and her gate-finder and bundled them into the bottom of an old trug-barrow. Then she wrapped the sapling in smooth clean blankets and placed him gently on top. The infant snuggled into his new movable nest and fell asleep.

"Put on your boots Bruder", Helga whispered  "We are going on a journey....". 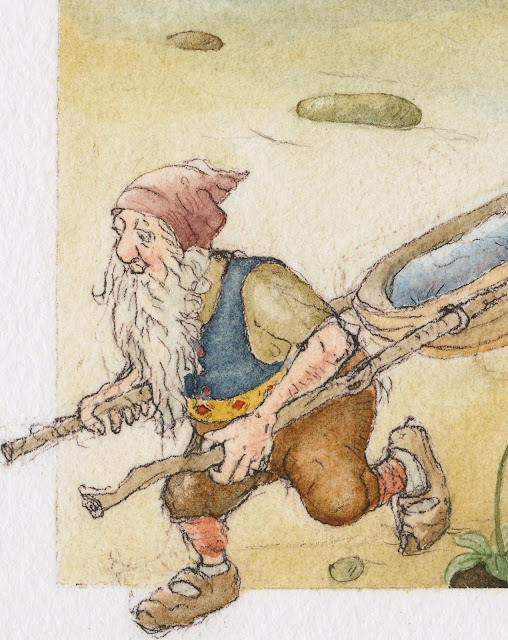 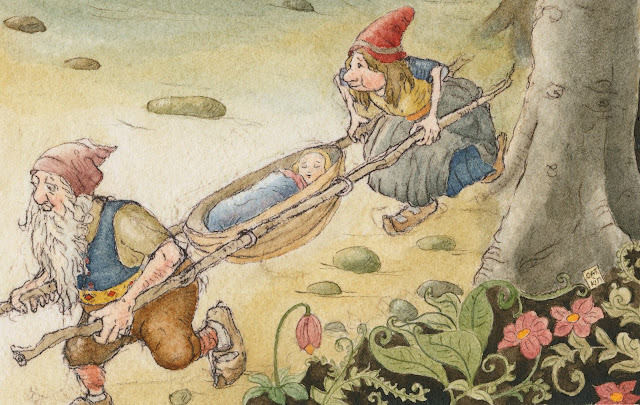 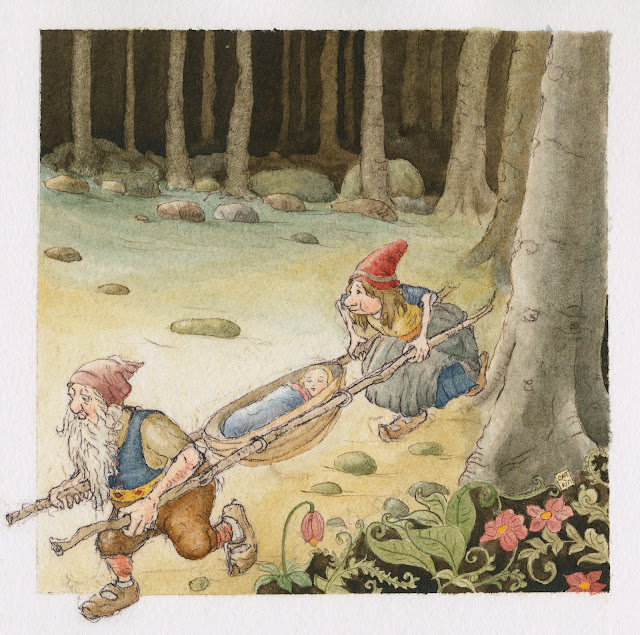