Recently I discovered that my slowly emerging story 'Troll Song' has more substance than at first I knew.

If you are new to The Old Burrow snippets of the growing tale can be found here and here.

I still find it uncanny that you can imagine, draw or write something that seemingly comes from within the individuated self and find out after that it has history and substance.

Being born and brought up in Australia I can assure you I was not surrounded by Norse myth and legend. Australia as a young country was and probably still is desperately trying to find its uniqueness and separateness from any English or European influences. As a result I studied 'The Gold Rush and The Australian participation in the World Wars repeatedly throughout  the school years because there was no other history 'They' felt appropriate. A token gesture towards the Indiginous Aboriginal culture was made but no more. As you can probably gather I didn't feel at home.

When creatures and characters  that I know very little about find their way onto paper and the blurry colours and callings of the North pull me here and there to find out that such things are hundreds of years old - well, I feel beautifully small and connected to something old and quietly important.

In the Valley where I live people accept such occurrences very readily. Not long ago, nestled on the floor of a beautiful friend's home, eating wholesome food and drinking homemade apple wine with new but delightfully familiar friends, I heard a story about 'Troll Songs' and Troll Tuning.  My ears pricked up and my attention focused, I knew I was about to learn more about my Troll and her Song...

The Trolls or Trowies are the nature spirits of the Northern Countries. Their stories live in Iceland and Scandinavia and as far south as the Shetlands and Orkney. They are a mixture of huge and small, benevolent and dangerous, stupid and wise. A little like us I guess.

In Norway the best fiddle players are known to have made a deal with the Trowies. A special tuning on a special fiddle playing special tunes are enough to put both the player and the listeners into a trance like state that can only be broken by someone ripping the fiddle from the players hands. 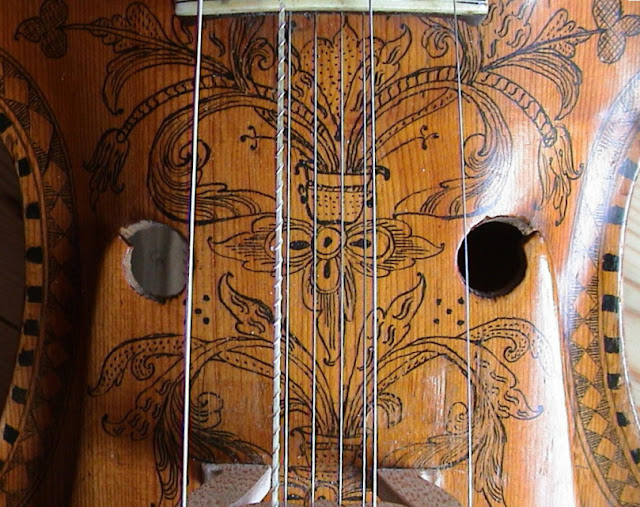 Here is a little tale about a creature called a Fossegrimen. It is said that if a musician is willing to pay the price he or she will be "enabled to play in such a masterly manner that the trees dance and waterfalls stop at his music."

Once upon a time there was a Fossegrim, a strange creature who inhabited a hole on the riverside. It was common knowledge that whoever paid his price, which was a great slab of meat, could
listen to his music as he started playing his fiddle. When the Fossegrim received a big shank of meat he would play the most
beautiful tunes for hours. But, when someone fed the Fossegrim a small piece of meat he would only play a short tune and then disappear. People who lived near the river visited the Fossegrim very often, as they loved his music. They said amongst themselves that no one in he world could play the fiddle like the Fossegrim.

Now the Fossegrim living in this river was short of stature and shiny of complexion. His blond hair was long and wild but his face friendly and his eyes clear as crystal. When he played the fiddle his fingers moved so quick that people where unable to follow them. His music could be gentle and sweet, but it could also be wild and untamed on occasion.

Near the river lived a greedy miser who secretly longed to play the fiddle but didn't know how. Now of course he could just go to the Fossegrim and pay the price, but he was too far too miserly to give away a good part of his meat. So he took the bone of a goat and said to himself, "That should be enough!" The villagers tried to persuade him to give the Fossegrim what he demanded, as the Fossegrim could be furious when insulted. On these occasions, they said, he would pull his victims under the water. The man did
not listen to their good advice and he went on his way.

He threw the goat's bone into the river but nothing happened. Annoyed, he shouted,

Slowly the little creature appeared from his hiding hole and sat himself on a stone nearby, gazing at his angry visitor. The Fossegrim took his fiddle out but didn't play it, he just stared at the man. The miser got more irritated and asked the Fossegrim when he was going to teach him how to play the fiddle.
The Fossegrim said

"For a goat and a buck I will teach you how to tune and play
but for that bare bone of yours even tuning your fiddle is too much."

The Fossegrim disappeared into the water and the man went home,
dismayed. He placed his fiddle in a corner of his room and he never
bothered to play it again.

Click on the picture to hear the Fossegrimen's strange song 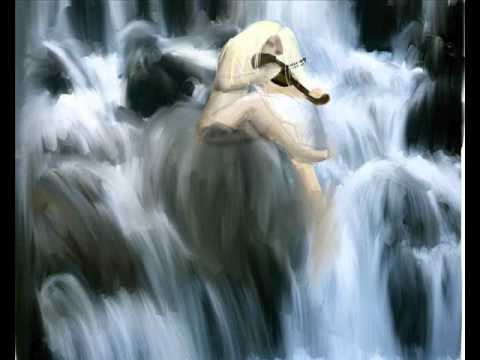 Not so long ago during the mid 19th century the Hardanger Fiddle was banned and burned by those who feared its magic.  People burnt or hid their fiddles out of fear for their soul or  fear of persecution. But, like most things that possess a certain magic Trowie music did not die. It only lay quiet for a while before weaving its spell once more.

And a beautiful tune by the 'Press Studs' ... Da trowie burn 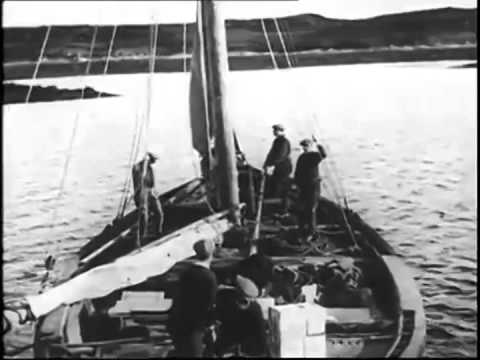 I love the merging of pictures and sound, stories and voice.

Quite regularly I witness strange and wonderful things in my head – especially before going off to sleep. Rarely, I hear sound and music too which only serves to deepen the entrancement and occasionally fills me with a frustration and loneliness for not being able to share the spectacle with any kind of satisfying clarity.

Last night for example I saw a tall, face-painted gentleman, a kind of regal jester standing proud in his costume made of light and summer colours. He sang and spoke with a quiet strength and a riddled wisdom. Slowly he moved and gestured in his small space on the street made of hardened dirt, trees and spacious, patient market stalls. Strapped to his back were at least two tall birch branches covered in pale green lichen. They rose far above his head, almost wing-like towers and he was not at all strange in his landscape. He was known, he belonged there and was respected. My own small bedtime story and then I sleep...

In the months or years to come will it come to light that a similar character exists in a mythology or story somewhere? Maybe, maybe not. It doesn't really matter but I have a feeling he may end up in a painting or story whatever happens...

Here is a little sketch, he is called the Pulpiteer.
I'm sure his hat was different and I'm not sure how the Birch branches were attached to his back but this will serve as a memory trigger for now. 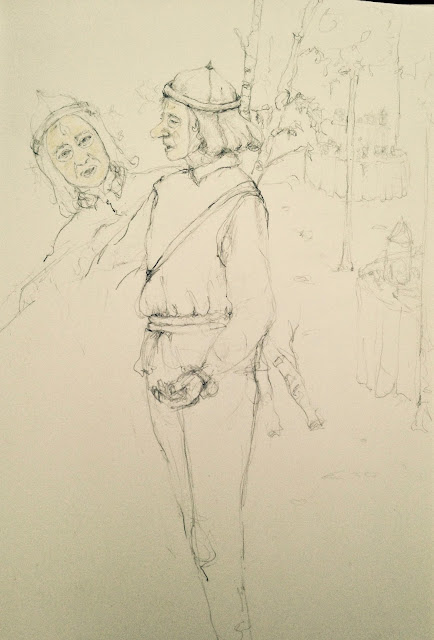 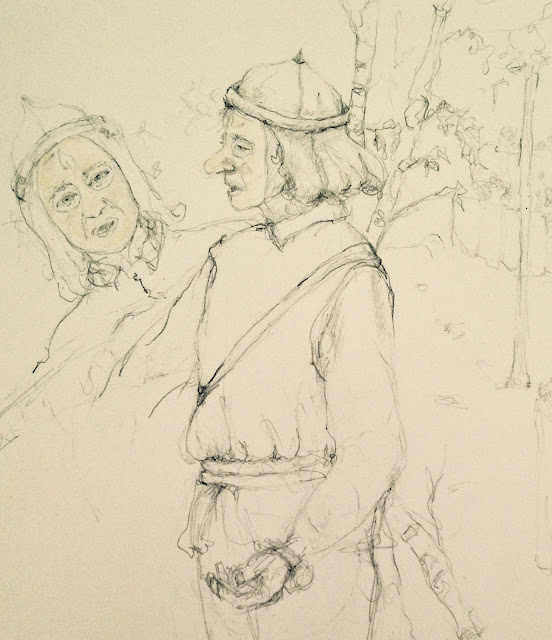 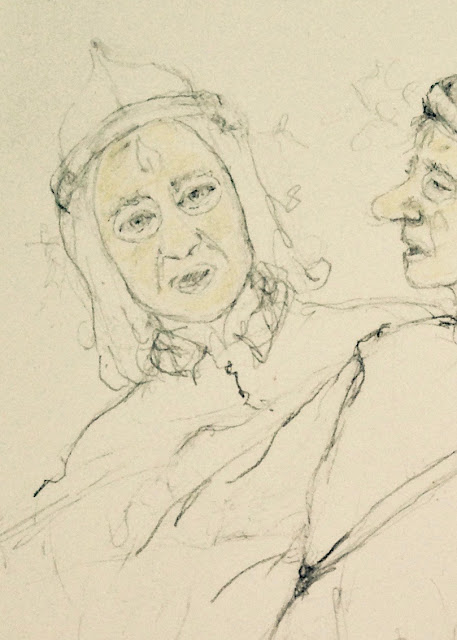 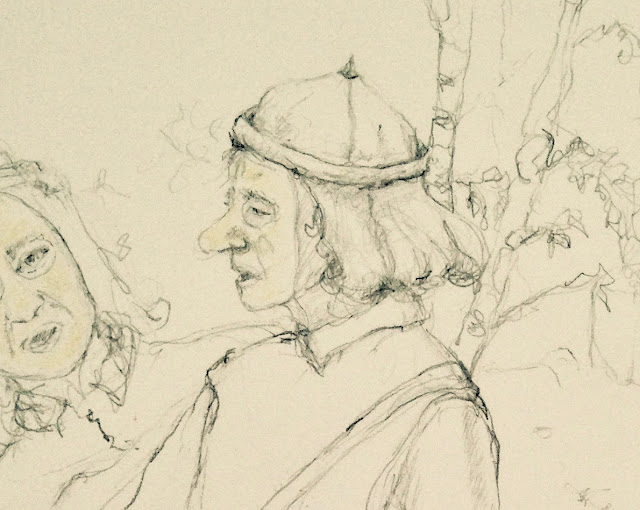