The Moon in All its Glory

I didn't see it, that huge Super Moon that last visited our skies in 1948. It was obscured from view by Scottish clouds and drizzle. But as it drew closer I was re-writing, tweaking and tailoring an Old Siberian folk tale about a Reindeer maiden and the Moon.


At the surface it is a delightful tale from the Arctic circle about how the moon came to be. Underneath this it is an unusual tale of female strength and the weakness and changeable nature of conditional love. And if you listen a little deeper still, there are also the quiet, grounded qualities of unconditional love.

I have only just begun sketching ideas for the illustrations and they may well change but here is a little peek into a Wintery Fantasy from The Far North...


Lusa, The Reindeer
And The Moon.

The Moon was not always as it is today.

Once he was a pale faced Prince who sailed the skies as a lost soul. Astral winds swirled in his hair as he roamed amongst the Stars, drifting wherever and whenever he pleased. For all his freedom his heart was lonely and in time he began to look for a companion with whom he could share the skies. 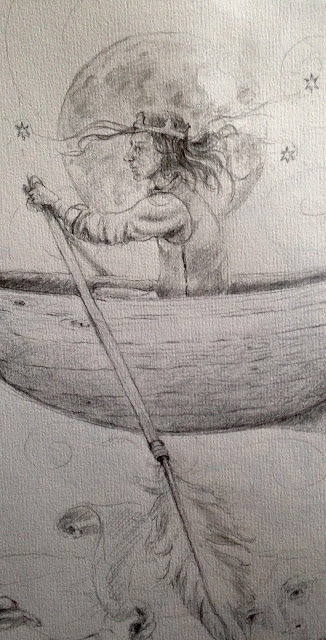 On Earth, in the Northern Lands, lands that the Sun leaves dark for long cold Winters, the Moon spied an Old Shepherd and his Daughter.

Just as the pale Prince rode the skies, Lusa, her Father and their people roamed the white plains and glistening Forests of the Arctic carrying their homes with them wherever they went. The Shepherds of the clan roamed even further still. In Summer they would travel North with the reindeer to calve and feed on the lush growth and in Winter they would travel South to find shelter from harsh weather and forage for food under soft snow.

The time came when the already old shepherd grew even older and could not make the long journey away from the clan. So on one cold Winter's night – though Winter itself was a long night lasting many months – Lusa set off on the long journey South alone.
Lusa and the herd travelled slowly – walking by torchlight and resting by fireside. Time passed unmarked by dusk or dawn and Lusa sang contentedly as she played her gentle drum. 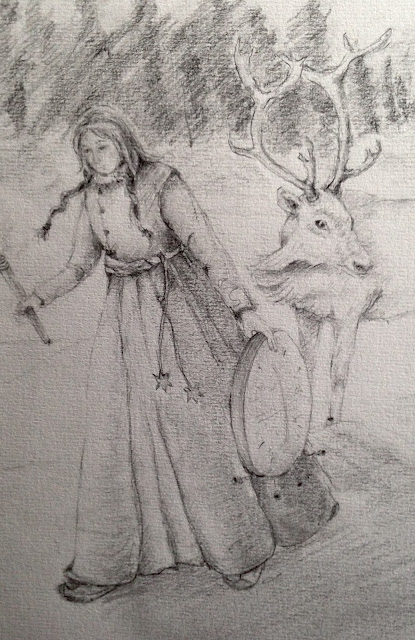 The Moon flew a little closer – he had heard this music before. Such a beautiful sound – as vast as the sky and as enchanting as starlight. The prince bowed low to the trees to listen closer still. With a joy in his heart he forgot himself and his loneliness in her song.

So mesmerized was he that he unwittingly sank Earthwards with a love laden smile and when the music stopped he awoke to find himself knee-deep in snow. 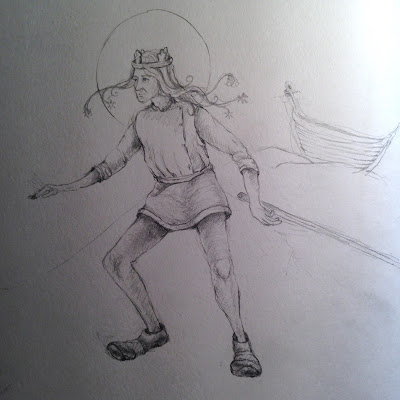 Scrambling to his feet he promised himself that this was the woman he would make his own. He would take her back to the sky to sail the sea of stars in his beautiful boat and he would never be lonely again.

His lovelorn hunt began. Through the snow-laden forests Lusa’s starlit voice and gentle song guided him to her.

As the Moon grew closer Lusa began to feel uneasy – as any creature does when it feels the hunt coming. But Life gifts both the Hunted and the Hunter...

Lusa beat three strong beats on her drum. Boom Boom Boom.
The resonant sound shook the snow from the trees and the Reindeer stood silent.

Out from the herd the largest reindeer stepped. In three large elegant strides he changed his skin for man flesh.

Lusa and Taiga, for that was the name of the man with a Reindeer’s soul, bent their heads together. Their breath caressed each others faces before becoming glittering rainbow coloured ice-dust in the air.

“The Moon is coming for you” whispered Taiga.

“ I do not want to live in the sky with a pale faced prince. I am content here with you” breathed Lusa.

“Then we must hide you.” said the gentle voice of the man with reindeer feet.

The moon grew closer still. His light began to shine like a cold sun casting long shadows across the Snow.

Quickly Taiga turned Lusa into a snowdrift and then turned himself back into a reindeer and began snuffling for lichen and moss.

The Moon approached the herd. He stood tall and thin, his round face hungry and expectant.

“Where is your shepherdess?” he crooned.
But the herd ignored him and just kept on foraging.

He walked around the herd this way and that. Bending low and crooked he looked for trails of footprints in the snow, but there were none.

And so the Moon flew back up into the skies to see from above where Lusa might be – but he saw nothing.

The sky darkened to an inky blue as the moon sailed away. Taiga became a man once more and returned Lusa to her body.

“ He will come again” Taiga whispered gently. “Run to the Yaranga and I will hide you there.”

So Lusa ran to the Yaranga and closed the flap. Once inside, Taiga transformed Lusa into a small oil lamp and returned himself to the form of a reindeer. 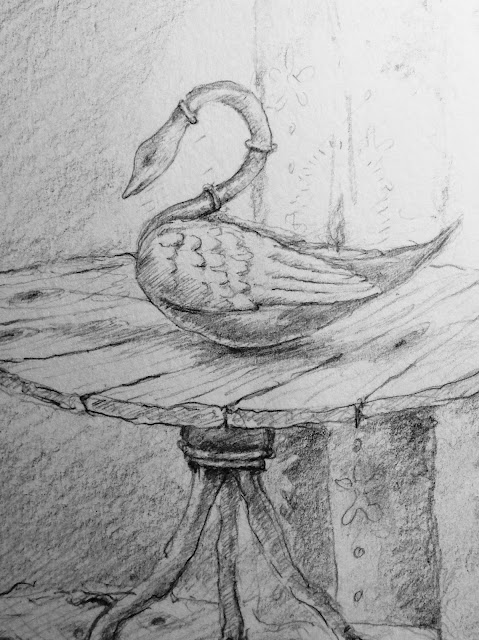 Lusa waited, listening to the steady breathing of the herd outside in the otherwise silent forest.

The Prince spied Lusa’s soft warm light as it glowed amongst the trees. Under cloud cover he slyly lowered himself to Earth. Striding determinedly through the snowdrifts he cut a straight track to the Yaranga and threw back the entrance flap. At the sight of the empty space his heart sank and he began a desperate search. Under rugs, in satchels and under coats but Lusa was in none of those places.

“ Where are you?” he crooned. He leaped outside into the cold air. Circling the Yaranga and then the trees, he looked high and low for her.  Running through the forest calling sweetly and playfully the Pale Prince tried to lure her from her hiding place.  Lusa remained a quiet amber light and said nothing.

When he was a way into the forest Taiga stomped his hoof in the snow and Lusa became a woman once more. She peeked out from the entrance flap.

The Moon Prince beamed and ran to the Yaranga and as he neared the entrance Taiga stomped his hoof yet again.

The moon hurtled through the flap but there was nothing. He frantically checked everywhere. He checked coat pockets and tiny boxes but Lusa was nowhere to be seen.

The Prince huffed and puffed as he stomped out of the tent. His anger rising, he began recklessly searching the herd and the sleigh tossing Lusa’s meagre possessions carelessly into the snow as he went.

Taiga stomped his hoof again. Lusa peeked out from behind the entrance flap .

“ What’s wrong with you? I’m over here” she giggled.

The Moon burst into the Yaranga again and again Lusa was nowhere to be seen.

In this way Taiga and Lusa kept the pale Prince running. Deep into the forest and back to the Yaranga. Over and over until he was utterly exhausted. When they could see that he was weak Taiga stomped his hoof once more. This time Lusa faced the Moon as herself. This time her strength was far greater than his and she pushed him to the ground and bound his legs and arms tightly.

She stood over him. “I am a free spirit,” she said calmly “I do not wish to be captured or owned by anyone. Nor do I wish to leave my home.” She left him shivering in the snow shocked, chastised and cold.

The Moon pleaded with her, “Please, I will freeze to death out here in the snow. Please take me into the Yaranga and let me warm myself and then I will return to the skies and never hunt you again.

Lusa pulled the Prince inside and wrapped blankets around him. She could not bear to see any being suffer but she was no fool.

“I don’t believe you.  You may sail back to the sky but when you are strong again you will return.”

“If you set me free I will share my light with your people.”

So Lusa carried the now warm but still weak Moon back to his vessel and watched him sail his beautiful boat up into the sea of stars.

And there he still shines – our pale faced prince of the skies that marks our months and steers our tides and sheds light upon the Northern lands in their season of darkness.  To this day, out of love and respect for all the free spirited people, he leaves a small beam of moonlight twinkling in their eyes.