I have always painted and drawn slowly. No amount of pressure has ever made me faster in fact quite the opposite.
There have been times that I was told that my art was too delicate, too detailed, too traditional, too quirky and too slow. Every now and then, in an effort to try to step up and be sensible and make money from my skills I would change tack. Following the advice of those who 'knew the world better' I would attempt to draw large, paint boldly, paint brighter, paint faster. It never worked. More often than not, no matter how I started a piece I would find myself settling quietly into some corner of detail listening to the sound of rain at the window and forgetting myself.

I surrender. I love slow, I love detail and I love small.

Just last week however a lovely thing happened and I think that maybe things are changing.
Craft Design House is a lovely online Gallery that wholly embraces the 'Slow Movement'. The international 'slow movement' is growing. There is slow food, slow cities, slow tv, slow sex, slow fashion and now it seems slow buying of slow art. They asked to interview me for an article and I gratefully accepted.

Click here for the Article written by Craft Design House 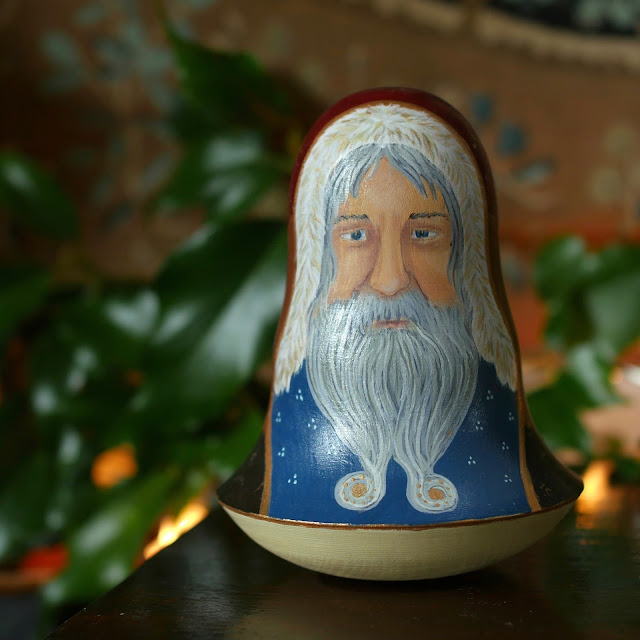 Where do you live? Where is your studio? Is where you’re situated very important to the work you create?

I live near a river in the middle of nowhere and I love it. Up stream is a beautiful Buddhist temple called Samye Ling. It's full of prayer flags and wishing trees and even has a fairy hill. Down stream is a beautiful bridge where two rivers meet and I swear a Troll lives under there. One day I'll draw him.
I have always painted things of a slightly magical nature but I am definitely more at home here than I have ever been before. It's quite something special. It's as though the paintings belong here. 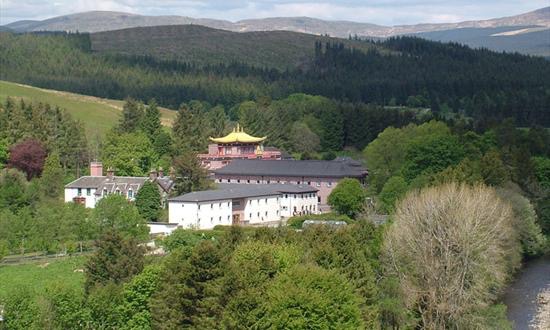 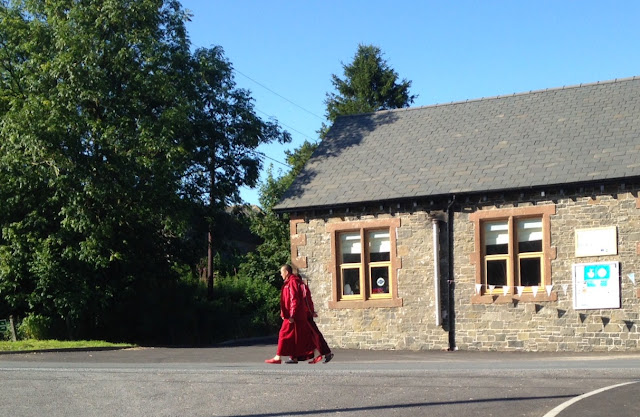 What are the origins of the figurines? Where do they come from? What are they made of? How did you find them in the first place? Do they have a particular name?

I first came across Matryoshka when I went to Russia in 1986 – oh gosh that's along time ago! It was still the USSR then and the streets and the people were all of a grey colour but the market stalls with the Matryoshka glowed in the Winter light and I was captivated. Each one delicately painted, telling  it's own story. Some were similar but no two were alike – it was as though you could see and feel the quiet mood of the artist who created them in the little brush strokes.

I've always wanted to combine my love of painting and illustration with 3 dimensional work and this seemed like the perfect way to do it. For along time I was unable to source the blanks but recently I have found a contact who can get them for me from Moscow and they are more wonderful than I expected. The ones I paint are an unusualform of Matryoshka called Nevalyashka sometimes also called Chime dolls.
They are made of Lime wood and sound of the bell is quite lovely. Very mellow, the whole thing is very tactile and quite charming. 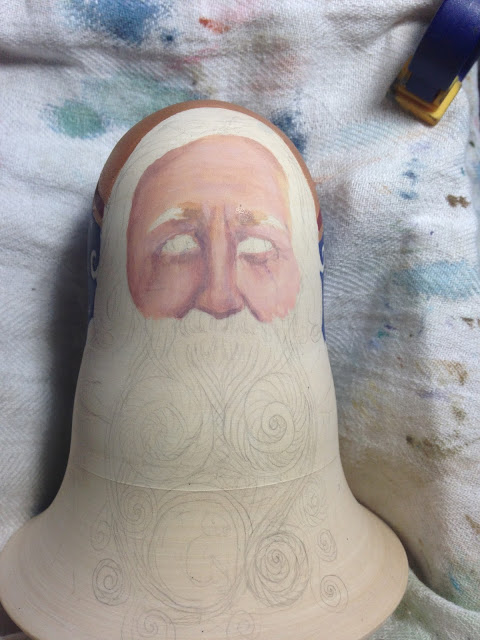 What does slow buying mean to you/what is its most important aspect as far as you’re concerned?

I adore the concept of slow buying and quite coincidentally I have just found out that our village hub is in the process of looking at becoming part of the Slow Movement ( I suspect that won't happen in a hurry).  I've spent so long away from television and the media I wasn't aware but it seems the whole slow movement is really catching on.
I'm not surprised though, it was way to fast for me. Every moment of life is important and valuable and if your head is full of huge to do lists the moments slip by un-noticed and a huge sense of dissatisfaction ensues. I feel slow buying is a beautiful way to buy, particularly because it honours the time taken to produce a piece of artwork which can only enhance the enjoyment of the piece. 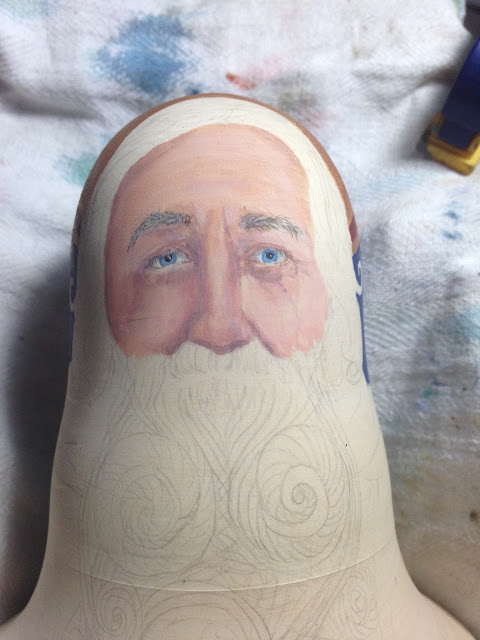 I have always painted slowly. Once a design of a sketch has found its way onto a surface I love settling down to paint and losing myself in the detail. It becomes almost like a meditation. The delicate smell of paint and freshly sanded wood, the sound of the wind outside or rain on the windows. The slow appearance of a picture growing on a once blank surface. 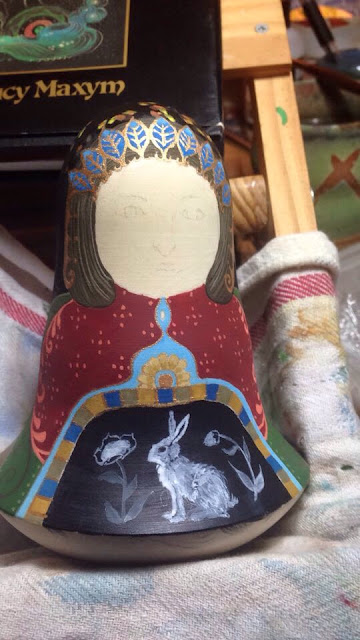 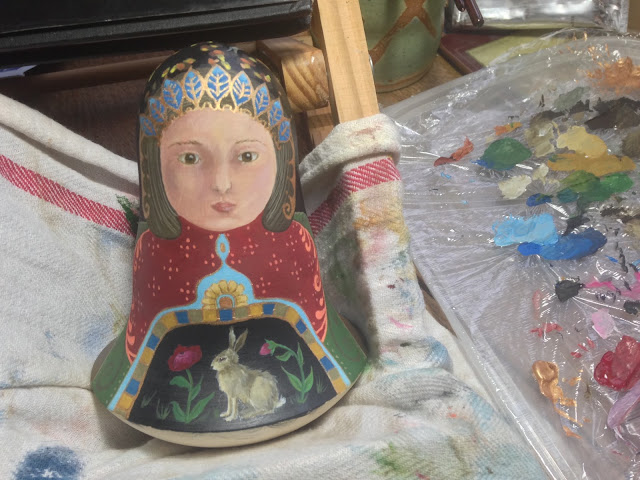 What do you enjoy about the commissioning/personalising process? Can you give an example of a recent commission?

Working on a commission can be a delightful process. I have a beautiful commission in the pipeline at the moment for a couple who live in a neighbouring valley. They are renovating a very old house. Underneath the floorboards they found an old note handwritten by a child which said " Would somebody please tell me what happened to the Crystal bird?" When they asked me if I would like to paint a picture to enhance the story I couldn't stop grinning. The imagination began to swirl with images.  immediately. Pure magic! That one happens to be for a painting to hang on a wall but there is nothing to say it couldn't be a 3 dimensional object if that is what was wanted.

I also have a small commission which is nearly finished for a Christmas ornament , one of the Nevalyashkas. The client has a cheeky cat that likes to climb into their Christmas tree and so it makes perfect sense that her portrait becomes part of a Christmas decoration. 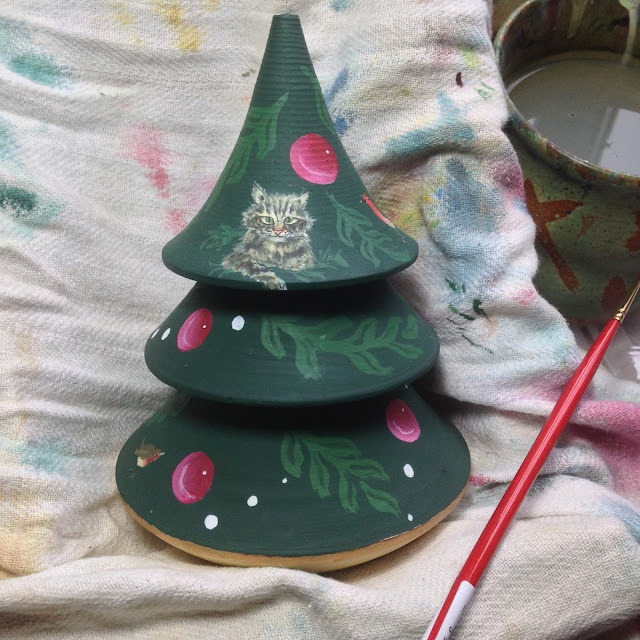 What options for customisation do you currently offer?


I can customise most of the Nevalyashkas with a little something to make it more personal if clients wish or a whole new piece can be commssioned. Traditional 2 dimensional Illustrations can be commissioned too of course.


About the painting process – does it need to be treated first or is it ready to go?

The blanks arrive from Russia wrapped in Russian newspapers and in a box absolutely covered in Russian stamps. It feels like Christmas no matter what time of year they arrive. The Nevalyashkas need a light sand and I seal the wood too before I start to design or paint. Then, once they are painted they need to dry thoroughly before they are varnished and then need to be put away in a warm dust free place to dry completely. 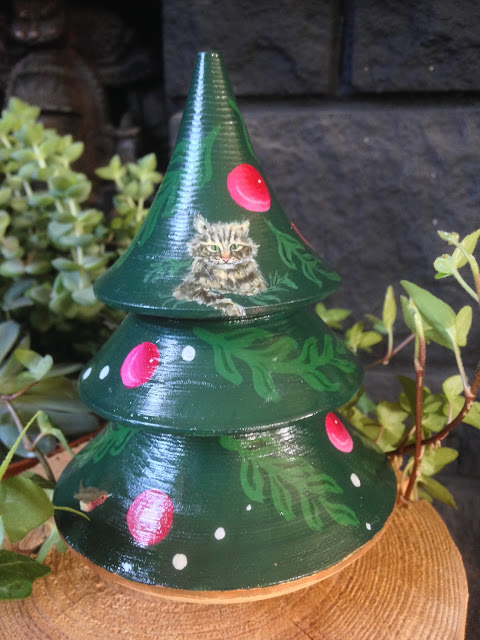 Where does inspiration come from? Who are the people/faces you paint? What are your influences?

My inspiration, I think, is sort of anything Northern and folktale-ish. I can't explain why really but my pull to the North, places like Iceland and Norway and across through Finland to northern Russia is quite strong. Very odd having been born and brought up in Australia , I know. I guess somethings just remain a mystery.

The faces and drawings sometimes come out of nowhere and sometimes might be sparked by a particular idea that leads me to look at a certain type of artwork or style and that may lead to another idea and to another which leads to a portion of the drawing and from there it might create itself. It's a bit like a walk in the woods you never know what you might find. An Antler here a Jay feather there, all beautiful and inspirational and unexpected.


How integral to your wider work is your illustration at the old burrow?


The Old Burrow began as a place to simply display paintings but quite naturally writing is taking its part as well. When people buy paintings they most often will want the writing that goes with it as well. The writing is a snippet of a story - an introduction give the viewer a helping hand into the realm of the imagination. My greatest love is to see the sparkle in someones eyes as they tell me more about whats happening in the painting. The gap between Adult and playful joyful child is very narrow really - it's just sometimes people need a little nudge. 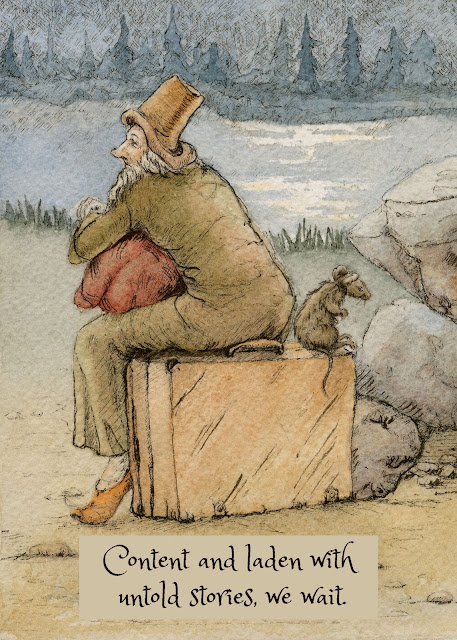 I love the idea of creating a mechanism for story telling, most peoples lives have a bit of magic running through it - to create an artwork to help tell the tale just brings that magic to life.

How long will it take from first contact to completed work?

The pieces vary in the amount of time they take to create, some designs are more complicated than others. And of course it depends how many orders I have as well. Usually I tell people 2 - 4 weeks and of course I will let them at first contact if that will be sooner or later.