Lately I have begun to wonder why I have a tendency to draw characters with big noses.  If I put pencil to paper, to draw a face, 8 times out of 10 it will end up with an abnormally large and interestingly shaped honker. My inner psychoanalyst said 'there must be something in this' and so I turned to Guru Google.
A small amount of googling threw up predictable results; Freud thinks it has something to do with sex, hmmm, no surprises there. Some people suggest it is a symbol of curiosity and inquisitiveness, hence the saying 'keep your nose out of this'.  Still others suggest it is the seat of the sixth sense, a symbol of energy, intuitive wisdom and instinctive knowledge, 'The nose knows' or ' A nose for a bargain'.

In Edmund Rostands Cyranno de Bergerac, Cyranno asserts that "A great nose is the banner of a great man, a generous heart, a towering spirit, an expansive soul - such as I unmistakably am..."
Chinese physiognomy, (Face reading), uses the shape and size of the nose to predict character and fortune.
So I took all this away with me and deliberated and cogitated...
To me big noses are interesting and funny. I often associate them with old age and kindness; intuition and wisdom, though not always. It's hard to ignore the fact that a lot of 'baddies', whether it be the film or book variety, have a hooked and bony nose. These boney protrusions, accentuated by some large and 'V' shaped eyebrows enhance their sense of menace. However, the most predominant feeling I get when I see someone with a sizeable and characterful nose is that they will have more and better stories to tell. As though somehow the shape of their nose has given them a privileged pass to a life of greater adventure than those people with smaller, more ordinary noses. Every bump, nook and hook that passes me in the street is like a beautiful mountain peak, far off in that distant land called other people's lives. Each one full of secret trails, twisting and turning passed spectacular views, elusive wild creatures and deep dark ravines.   I know it's not rational- not even close- but that's how it is. 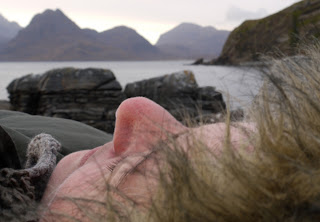 A Peak at the Cuillins

The little painting below is definitely 'nose' oriented. 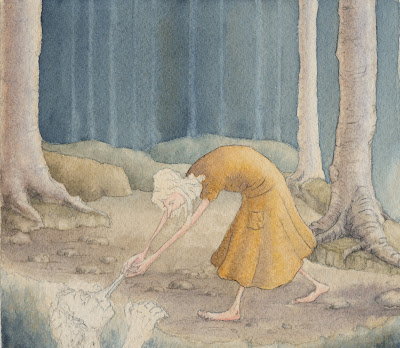 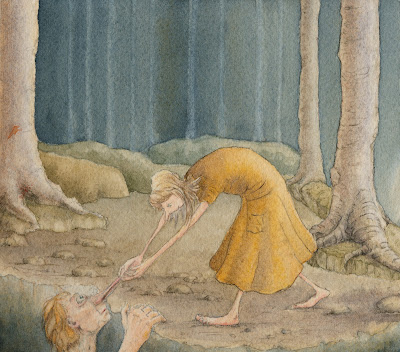 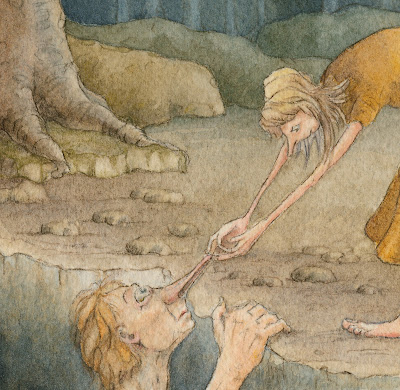 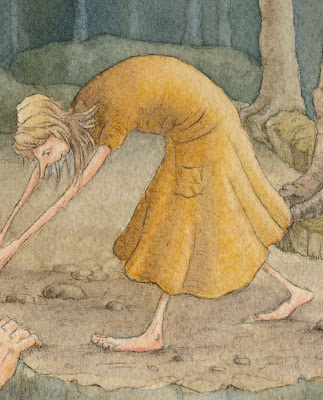 A Nose For Trouble.

Another brave pathfinder, she mused scornfully.
He has all the implements he needs to survive strapped to his belt, now they are utterly useless. Why do they come here? Why do they even bother? Fortnights and moonlights they spend drifting amongst the trees, hoping for sign or footprint of the Maker. They do not fathom that he leaves no trace for the sceptic, only messages for the faithful. Should I just let him go?
The Forest Imp felt momentary shame at her heartlessness, before she swelled with compassion. Clutching the young explorer's wrists with strength remarkable for her size, she hauled him to safety as she had done for all who came before him.
"Stay at home," she hissed, "you will learn more that way". 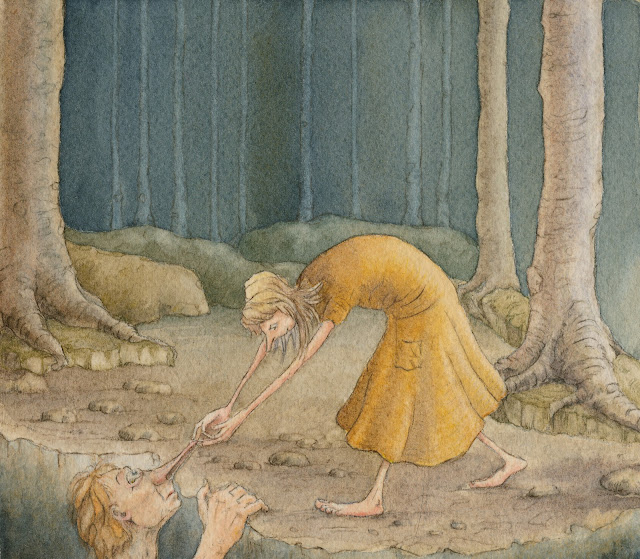